Finality without end: with these words, Immanuel Kant, in his Critique of Judgment, expressed a relation between the aesthetic emotion, the judgment of taste felt before beauty in nature, which, if it does have an end or a raison d’être, is not really comprehensible to us, and is thus disinterested, and the sometimes analogous feeling experienced before beauty in a work of art. The latter is motivated in its conception by virtue of the fact that it has a certain utility, which can make the object a piece of knowledge, and it is thus interested. When the aesthetic pleasure derived from a work of nature’s, like a flower, or a landscape, is the same as that derived from an artwork, then it is disinterested, without end – a finality without end.

Finality without end is, as Claude Lévi-Strauss emphasized, a term used to designate “the absolute art work”. The objective of this approach in the presentation of the thirty works of tribal art which constitute our exhibition, and which all of course come from places far away from where Kant developed his inspiration and thinking, is to reveal a historical and poetic connection between these artists from distant lands and those of the Western world, which nowadays has the opportunity to contemplate these works. It may be said in favor of the Enlightenment movement, of which Kant was one of the most representative figures, that it exhorted a prevalence of reason, of knowledge and of open mindedness, over the sloth, and intellectual laziness and cowardice that dogmas generated. It was a hyphen between great minds, very literary ones, the tribal arts being a form of writing which, like a mytheme in mythology, all at once embraces a large concept whose elaboration obeyed a strict semiotic, in which each element is a sign. These creations and those that produced them were impregnated with an oral tradition, and oral literature, which had an importance whose importance we seldom realize the extent of, as well as metaphorical and poetic powers. It is obvious that this selection of pieces, these finalities without end, on view here at our exhibition and in the accompanying catalog, were created in an environment of intellectual emulation, in which aesthetic force expressed, as Kant described it, a disinterested human nature.

Finality without end is also a play on the polysemy of words, because these displayed works of tribal art from the Congo, Gabon, Ivory Coast, and New Guinea, among other places, are finalities, completed works in their ancient and finished corpus, in which perfection and tender emotions are mixed, and which are still little or not at all known by the public. They are an extension of the end of a world, ultimate achievements that affirm, to paraphrase Claude Lévi-Strauss once again, that “they alone bear evidence that, among human beings, something actually happened during the course of time”. Since Lascaux, through these manifestations, this preserved glory is reassuring. Guardians and transmitters that they are, several eminent collectors honor us with their generous confidence by lending us, for the duration of this year’s BRUNEAF-CULTURES, these gems as they quietly acquire the status of a patrimony for all of mankind that they so richly deserve. 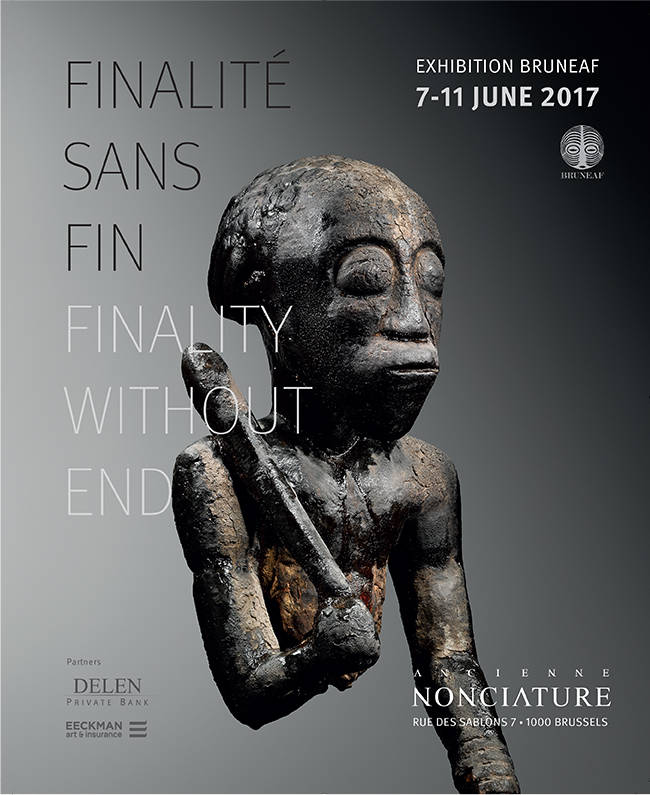